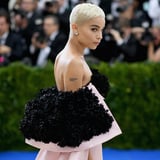 Image Source: Getty / Dimitrios Kambouris / Albert L. Ortega Like most great partnerships, Zoë Kravitz and Channing Tatum’s began with a confrontation about Crocs. The unexpected duo recently spoke with Deadline about Zoë’s forthcoming directorial debut, Pussy Island: a thriller about a cocktail waitress’s ill-fated trip to the private island of a shadowy tech mogul, played by Tatum. (First of all, yes.) During the interview, however, Zoë and Channing shared a rather remarkable anecdote from their first time meeting. (Remarkable to me, at least.) “I was just trying to be a good friend, . . .